If you are a student, stop now!

Only teachers can take out free trials or subscriptions to our subject sites at www.thinkib.net

In line with the IB Learner Profile, "Act with integrity and honesty".

Alternatively, sign up to our sites at www.studyib.net which are specifically designed for self study and revision.

I confirm I am a teacher

Some politicians are advocating the US government mint a new coin as worries mount that America's money will run dry.

It is October 17, 2021, and the US is just hours away from a historic and highly damaging default on its debt.

The scenario could be from the pages of a financial thriller: money in the world's largest economy is at risk of running dry in just 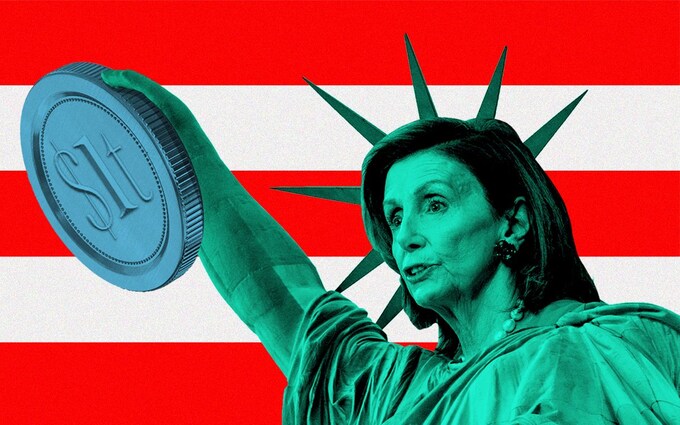 over two weeks. On Tuesday, Treasury Secretary Janet Yellen said the US will hit its $28.4 trillion debt limit on October 18 unless a temporary funding solution is found by Congress.

The stock market is at risk of turmoil, while the US government is facing a blow to its reputation as it hurtles towards a shutdown, set to begin this Friday.

Some politicians are advocating the Biden administration reach for a nuclear option: mint a $1 trillion coin.

With Democrats and Republicans in deadlock over raising the debt ceiling, creative options are being put forward. One loophole gaining traction is for the Treasury to mint a “commemorative” coin, allowing it to theoretically create the super high-value platinum token to get the White House out of its borrowing bind.

Bypassing a bitterly divided Congress, it would deposit the coin with the Federal Reserve to reduce the overall debt level, providing much-needed wiggle room under the debt ceiling.

While the White House has rejected the idea, House Speaker Nancy Pelosi is the latest convert and has argued it is an option being discussed by Democrats.

Paul Ashworth, US economist at Capital Economics, says the proposal is “quite wacky” though remains preferable against the US defaulting on its debt.

“Markets would prefer that the debt ceiling was raised through normal channels in Congress, through legislation,” he says.

“But if it came down to a choice of: the Treasury is going to default today, or it’s going to pretend it's got this $1 trillion coin and the Fed’s willing to go along with it, then they would prefer them to do that.”

The US has never defaulted before and an administration unable to afford to service its debt would deal a big blow to President Biden’s claims of competent governance after the chaos widely regarded under Donald Trump.

Most other countries, including the UK and the majority of Europe, do not put a strict limit on government borrowing although many have breakable fiscal rules that aim to constrain the total amount. The US, however, has a lethal combination of a strict debt ceiling and extreme partisanship.

Raising the debt ceiling used to be routine for Congress, but avoiding funding crises has become more difficult in the last decade as the two sides of the US government become increasingly opposed.

“It could be a cataclysmic event if the US actually does default on its debts,” says James Knightley, ING economist.

While it may seem a simple solution, economists say creating a $1 trillion coin does have a number of severe drawbacks.

First, some believe it is little more than accounting trickery, meaning that resorting to such a drastic option would likely undermine confidence in the US government.

Second, it could set a dangerous precedent. Despite independent central banks “printing money” to prop up economies under quantitative easing (QE), allowing politicians access to the printing presses has proved disastrous in the past, not least in Weimar Germany.

Finally, an increase to the money supply threatens to worsen inflationary pressures that are already on the brink of boiling over.

ING's Knightley says: “You can argue that QE should be inflationary in some respects because it's helping to lift the economy. But this is just much more a direct transfer of money that's been magicked up into people's pockets, because it's financing government spending.”

Its not a permanent solution to all of this and it's not going to do away with the debt ceiling but it is in their hands,” says Knightley.

“It's really high stakes and you can see why people are proposing radical solutions such as this $1 trillion coin.”

Points to discuss with a class

1. Why is the minting of a new coin seen as a greater high risk option than quantitative easing?

2. Explain why the new coin might be seen as more inflationary than other forms of expansionary monetary policy?

3. Explain why a wealthy nation, such as the USA, might be able to maintain sustainably high fiscal deficits almost indefinitely?

4. What impact might such high national debt have on a country's long run economic growth?